In partnership with the UNDP Office in the Kingdom of Saudi Arabia, Prince Sultan University presented a research paper titled "the Impact of the COVID-19 Pandemic on the Economy of Saudi Arabia, and the Initiatives and Efforts undertaken by Saudi Arabia to Respond to the Pandemic", which was conducted by the Center for Financial Studies (CFS) at PSU. 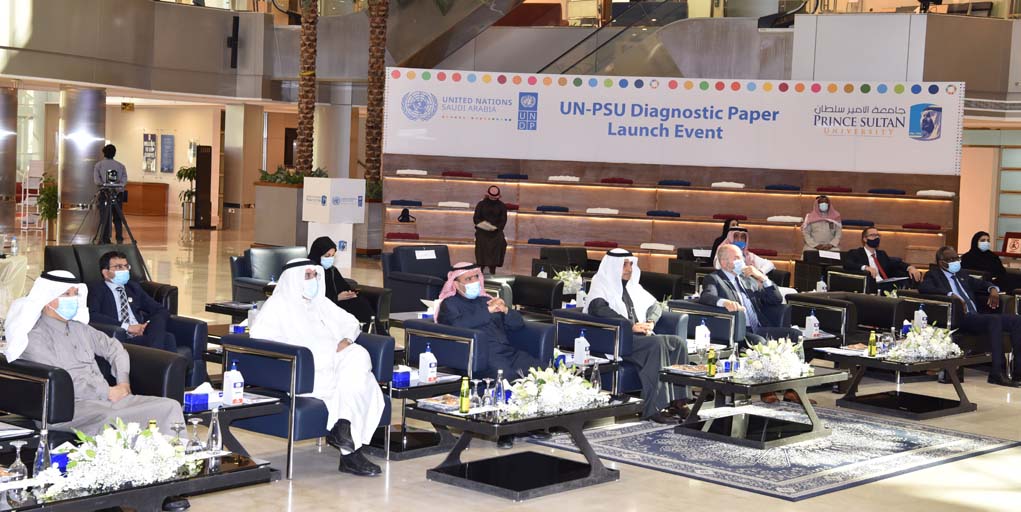 The paper was presented at the University and was also live-streamed online via social media platforms. It aimed at developing a report within the “One-UN” framework in support of the efforts exerted by Saudi Arabia to mitigate the effects of COVID-19 on the economy and society with the most vulnerable segments of society in mind, by committing to the principle of Leave No One Behind (LNOB), which enables Saudi Arabia to maximize its efforts to achieve the United Nations Agenda 2030, the Sustainable Development Goals, and Saudi Vision 2030.

The study sheds light on the economic and social landscape of Saudi Arabia focusing on the impact of COVID-19 and the oil price crises. It is also working to further enlarge the set of possible UN support and policy recommendations, including the ones already included in the UN COVID-19 Capacity Brief for the Kingdom of Saudi Arabia. This set of assessments, analyses and policy recommendations, with a particular focus on the most vulnerable groups, is based on the five development pillars highlighted in the “UN Framework for Immediate Socio-economic Response to COVID-19”, to lend urgent socio-economic support to countries and societies in the face of COVID-19, in alignment with the UN Secretary-General’s Shared Responsibility, Global Solidarity report. 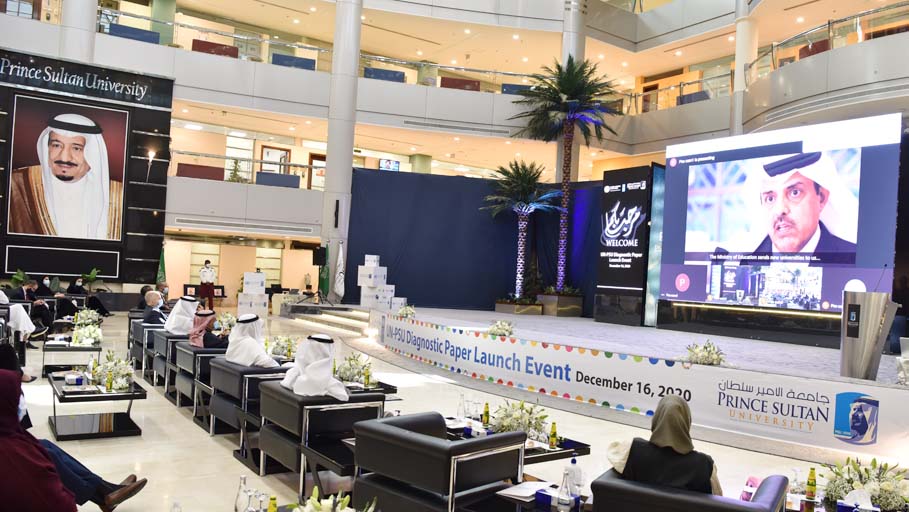 After presenting and discussing the study, His Excellency Dr. Ahmed bin Saleh Al Yamani, the University Rector, spoke to the media and said, “Today, PSU presented an intensive study conducted by the CFS on the efforts exerted by Saudi Arabia to respond to the effects of the COVID-19 pandemic on the economy of Saudi Arabia, and the initiatives undertaken in partnership with the UNDP office to address the pandemic in comparison with the efforts of other countries.”

Al-Yamani added, “This is just the beginning of working with the UNDP office, and we aim at conducting other studies to support the efforts of the government. Although the Center was established recently, it has proven its ability to conduct studies on an international level, that is, in cooperation with the UNDP office. It has also been able to overcome all obstacles as it won the best paper award in this area, which is a clear evidence of its abilities.

Moreover, His Excellency Dr. Mohammad bin Abdulrahman Al-Jebreen, PSU Deputy Vice President for Academic Affairs and the General Supervisor of the CFS at PSU, stated, “The goal behind conducting this study, in cooperation with the UNDP office, is to measure and highlight the government’s efforts, and how it deals with and contains the global crisis by focusing on the health, educational and economic aspects. Thankfully, everyone is aware of the government’s role and efforts by taking the pandemic seriously and responding to it. Saudi Arabia has also been able to mitigate the socio-economic impacts of COVID-19.”

Al-Jibreen added, “The unlimited support in all areas from our government during the pandemic was reflected in the Kingdom's ability to overcome the challenges of COVID-19 crisis with the least negative impact compared to other countries.”

Al-Jabreen concluded, “We worked for more than six months on this study, and during that time, the efforts that the government has undertaken to fight against the pandemic have become clear to us.”

His Excellency Dr. Mohammed Mudawi, Deputy Resident Representative at the UNDP, said, “We congratulate the Kingdom of Saudi Arabia for the distinguished efforts made in responding to the COVID-19 pandemic, which, as everyone knows, is a global pandemic that has affected economy, health, tourism, education and other aspects of life. The CFS at PSU was chosen for several reasons; first, PSU is a non-profit private university that has experience in research and has got a holistic picture of the situation in Saudi Arabia.” He also noted that, “Some countries conducted a similar study with the help of foreign entities, but, in Saudi Arabia, they sought assistance from a national academic partner.

Mudawi added, “The study focused on the economic and social challenges caused by the COVID-19 pandemic in the Kingdom. There is no doubt that the efforts made by the government are enormous, and what have been accomplished is remarkable. However, there are some recommendations to improve the performance of some sectors.”

Mudawi concluded, “We are pleased with what has been achieved, and are delighted with the partnership between PSU, the UNDP, and all United Nations agencies and organizations in the Kingdom.”

It is worth noting that the UNDP was established in Saudi Arabia in 1952 A.D., and it is one of twenty agencies, funds and specialized programs that represent the United Nations in the Kingdom. It is also an integrated part of the United Nations in different ministries that supports the government through achieving a remarkable progress in all socio-economic development paths and maintaining their sustainability.